For years, GPS guided machinery was the best and most advanced technology used to achieve accurate and consistent grading. This helped eliminate operator error, operator fatigue, hours of labor to verify elevations, and miscalculated quantities. The accuracy of GPS is often compared to the size of a golf ball. However, when fine grading is required, a GPS system on its own won’t cut it. That’s when incorporating a UTS (Universal Total Station) helps to tighten the tolerance down to a shoelace instead of a golf ball.

Combination for the Super Dozer

Think of grading a job site as baking a wedding cake, using GPS will get you a cake, but using a UTS dozer is like spreading the frosting across the top for a beautiful finish. When used together, the results are visually delicious and tasty. That’s exactly why we’ve combined the two systems onto one machine to create what we call a “Super Dozer”. When roughing in material, a GPS guided dozer works perfectly fine but when it’s time for the final pass and finished grade, we swap out the antennas for the UTS equipment. The UTS system operates with the use of prisms and a total station whereas GPS uses antennas and satellites with a base station. Using a total station with prisms allows equipment to operate indoors or when overhead obstructions like trees, bridges, and buildings are present. 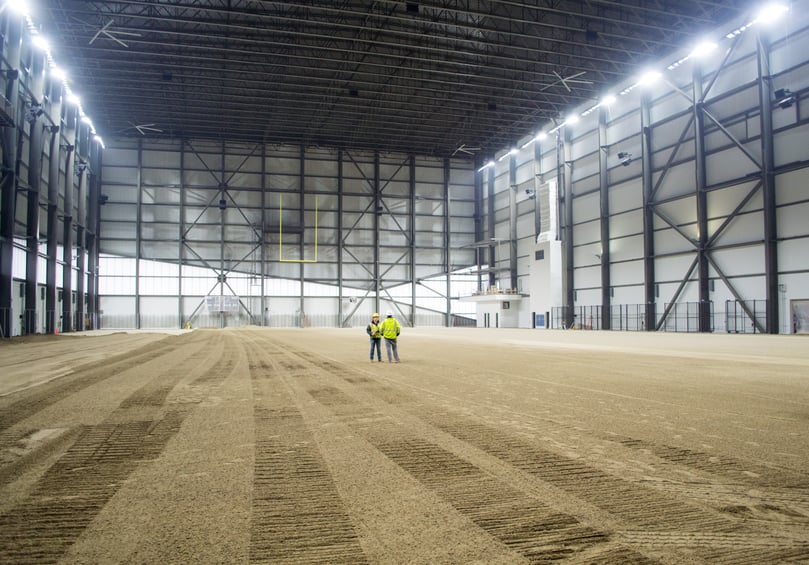 Why is a UTS system needed?

When a dozer is pushing dirt, the blade may "bounce" a little and leave imperfections in the grading. That small bounce combined with the golf ball size tolerance of GPS will result in a less than desirable finish. A total station’s tolerance however is millimeters, so the effect of the bounce of the blade is nearly unnoticeable. Perfect for the final pass on a football field, baseball field, or parking lot.

For example, when a synthetic turf installer checks the final grade, they will run a string line across the athletic field. Any low spots will be marked and corrected by bringing in more material. This costs unnecessary time, material, and labor.

The best times to use a UTS system is when expensive materials are being imported and when making the final pass for grading. The golf ball tolerance with GPS may not seem like much, but when a job site is several acres, a half inch high or low starts to add up. Having extremely accurate quantities on expensive materials is very important. With that said, a GPS guided machine could be used early in the process to get rough grading done, then switch to a UTS on the final pass for a minted-out finish.

A Universal Total Station can be used on dozers, motorgraders, pavers, box blades, etc – anything GPS can be used on. However, only one machine can operate at a time with the total station. The GPS base station can communicate with multiple machines at once. Since the UTS guided machines rely on prisms and a total station, a direct line of sight must to be established at all times to function. This becomes a problem on very large job sites that are 20+ acres. For these reasons a UTS dozer is best used on smaller jobs and for finishing touches. 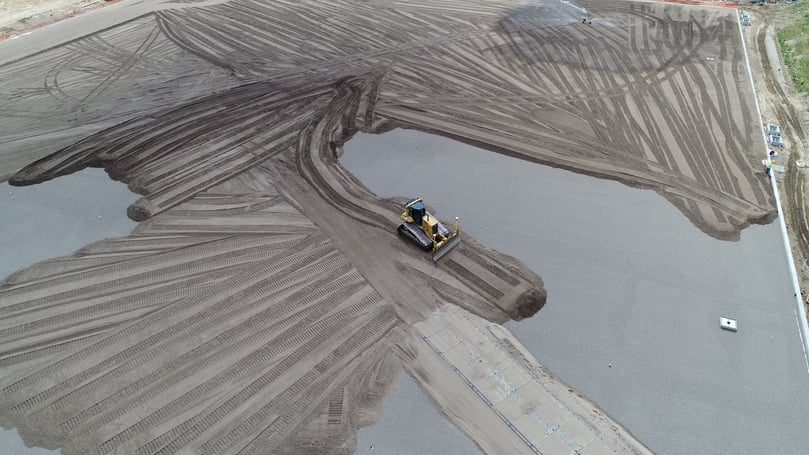 Above image is a GPS guided dozer spreading dirt on top of rock that was already graded with a UTS dozer. After the dirt is spread and on grade, the GPS equipment will be swapped out for UTS equipment for the final pass. This is what we call a Super Dozer.

When incorporating a Universal Total Station on grading equipment, we’ve found several added benefits in addition to greater accuracy on job sites. Less material has been wasted and imported unnecessarily because of grading deviance. We're much more confident in our material calculations knowing that the finished grade will be nearly perfect. Labor time has also decreased in terms of setup time and finishing time. What used to take 3-5 passes with a GPS dozer for finished grade now only takes 1-2 passes.